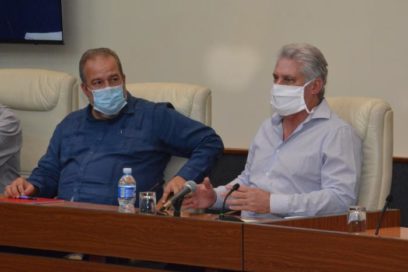 «We can contribute more to saving human lives by acting with responsibility,» insisted the President of the Republic, Miguel Díaz-Canel Bermúdez, yesterday afternoon, April 8, during the daily meeting to evaluate the epidemiological situation in the country and implementation plans to control propagation of the new coronavirus in the country.

The Prime Minister announced the decision to indefinitely extend due dates for electricity, water and gas bills, in order to close public offices where payment for these services is normally made.

He reaffirmed previously announced measures to eliminate the provision of services in restaurants and cafeterias, in which only take-out food and delivery service will be maintained, with limited hours, adding that efforts will continue to identify other activities and services that can be suspended or reduced.

President Miguel Díaz-Canel reported, «We had the opportunity to meet again with scientific personnel working to support our battle against the pandemic,”

noting that modeling of the pandemic’s development has been consolidated, as study of data from around the country has advanced and comparisons made of the situation in nations with characteristics similar to ours.

These models, he said, show that we are approaching a more complex situation, as we have announced and clearly explained to the population, reiterating, «The responsible behavior of each and every one of us is how we can best respect our compatriots,» he insisted.

The President stressed the importance of diagnosing rapidly all asymptomatic contacts of confirmed cases and those who exhibit symptoms, to ensure immediate treatment.

The isolation of contacts must continue to interrupt chains of transmission, he emphasized, adding, «We need more social isolation; we have not yet achieved the necessary levels of social isolation.»