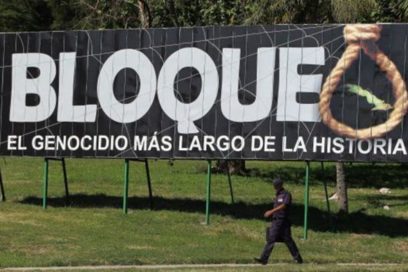 The Europe-Third World Centre (Cetim), a non-governmental organization with consultative status at the UN, denounced the U.S. blockade of Cuba, before the Human Rights Council, describing the policy as unilateral, illegal and illegitimate.

In a report presented to the Council during a session held in this Swiss city on September 13, Cetim noted that blockade is “Illegal, illegitimate, it is tantamount to an act of undeclared war of the United States against Cuba.”

The document also states that the policy “is contrary to the right to self-determination, depriving the Cuban people of their own means of subsistence,” noting that “Its aim is to harm the physical and moral integrity of a people, to make it suffer as much as possible; for this, it could constitute a crime against humanity. It must cease immediately, unconditionally.”

The report, put together with the help of Rémy Herrera, a specialist at France’s National Scientific Research Center, also references U.S. President Donald Trump’s decision to reverse some of the steps taken toward rapprochement by his predecessor, Barack Obama.

“The bilateral negotiations held over three years, having allowed real advances (such as the opening of embassies, migration accords, security cooperation…) and moved toward normalization, now enter a de facto regressive phase,” reads the document.

It also notes that “The motives invoked by President Trump are bellicose, anachronistic, and interventionist.”
The text goes on to highlight that the U.S. government’s new policy toward Cuba is aimed at damaging the socialist country’s economy: “The purpose is aggression against Cuba by depriving its economy of the most foreign exchange income,” in a clear demonstration of the tightening of the U.S. blockade of the island, which “has been condemned by the quasi-unanimity of the member states of the United Nations General Assembly,” for more than 25 years, notes the report.

Finally, Cetim called for a return to the road of normalization of relations between the two countries, “in conformity with the objectives and principles enshrined in the Charter of the United Nations.” (Taken from en.granma.cu)