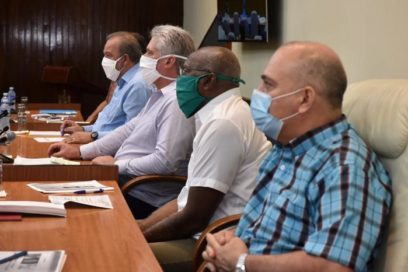 Cuba has entered the stage of limited internal transmission of COVID-19, as reported by public health authorities during the meeting led every afternoon by the President Miguel Díaz-Canel Bermúdez and Prime Minister Manuel Marrero Cruz, yesterday April 8, to review implementation of the plan approved by the Cuban government for the prevention and control of the new coronavirus, with 396 cases now confirmed.

This stage, explained Public Health Minister José Ángel Portal Miranda, is declared «when cases are confirmed in which establishing a link with travelers from affected areas is not possible, and are limited to small clusters in specific locations or institutions within the country.»

Active local transmission events have been identified in Consolación del Sur, Pinar del Río; Florencia, in Ciego de Ávila; Florida, in Camagüey, and Gibara, in Holguín – for a current total of 33 cases.

Several measures established in the plan for this stage were implemented in advance, during the previous pre-epidemic phase, the minister noted, and announced a new decision: All locations where local transmission is present, quarantine is to be established, requiring National Civil Defense staff to direct local Defense Councils as to next steps.

In his comments, President Díaz-Canel reaffirmed «the will of our government to continue working, in conjunction with all our institutions, mass organizations and, of course, our people, to reduce the risk of mass transmission of this disease.”

In particular, the President referred to two special motivations that marked the day, April 7: the 90th anniversary of the birth of Vilma Espín, founder of the Federation of Cuban Women, «an important force in our society that is directly supporting the fight against the pandemic,» and World Health Day, which celebrates the creation of the World Health Organization in 1948, this year dedicated to nursing.

We must emphasize, he said, that nurses are fighting a very important battle, and in nursing, women are a major, indispensable force.

Amidst this complex situation, the President said, it is only right that we commemorate the date and congratulate nurses, doctors and health personnel in general and, «recognize the example that Cuban health is setting around the world.”

On the other hand, he noted, we must address those who remain reluctant to maintain the discipline that is essential to “flatten the curve” of this disease.

«I know there are many who are confident that a vaccine will suddenly appear and everything will be resolved,» the President stated, «but the first vaccine we need is the only one we have right now: discipline, cooperation and solidarity. This is the vaccine we have at this time and the one that can lead us to success in confronting the pandemic,» he insisted. (Taken from en.granma.cu)