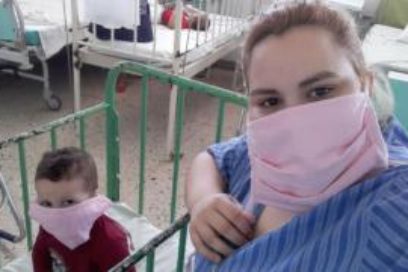 Her voice on the phone sounds calm, “Hello. Yes, this is Liliana Fajardo Bárzaga,» confirms the mother of little Dilan, who, at only 18 months of age, became the first child in Cuba to test positive for COVID 19 on March 22.

From one of the rooms of the isolation center located in the Joaquín Castillo Duany Military Hospital in Santiago de Cuba, the 19-year-old mother, also infected with the new coronavirus, agreed to talk briefly with Granma about the diagnosis, treatment and that «hurricane of love» offered by doctors, who have saved her baby’s life and her own.

«When the child tested positive, the first thing I did was cry, I was afraid. Almost immediately I knew that I was carrying the virus, too», says Liliana, who is now calmer, after ten days of treatment with satisfactory results for both mother and child, as she remembers how this unexpected experience began.

«We travelled from Madrid to the Santiago de Cuba airport on March 17, to visit my family in the municipality of Guisa, and as we did have any symptoms when passing through airport customs and immigration, I never imagined that I could have the disease. I arrived in my hometown and went out to do some shopping, and was in contact with some friends and family.

Another reason it was so difficult when I got the news, because I knew what it meant. Without suspecting it, I had put people very dear to me at risk, and even people I don’t know, but fortunately we did not spread the virus to anyone else.”

“Actually everything happened very fast. As soon as we arrived the neighborhood family doctor came to visit us at home, and when Dilan got a fever of 37 degrees, this same doctor, Dunia – I don’t remember her last name -didn’t waste any time, and reported it.

They took us first to the Guillermo González polyclinic in Guisa, and from there they transferred us by ambulance to the Norte children’s hospital in Santiago de Cuba, where they tested us both, although I remained asymptomatic.

They did two tests and the results were positive. From there we were taken to this isolation center where we received very careful attention.”

Equipped for this contingency, Dilan’s stay at the Santiago de Cuba hospital has not been too «thorny», according to his mother.

“Dilan has his own little crib here, and I have been with him all the time, because neither of us has any symptoms. But even so, I have been given the medications, including Interferon, and the baby, in addition to the treatment he is receiving for the new coronavirus, is being treated for pneumonia that was just discovered.

This means they give him medicine up to three times a day and a shot twice, but the nurses and doctors are very careful, they always perform the procedure taking all the precautions.

They pamper him a lot, too Since we arrived, I tolf them what he likes to eat and they prepare meals to his liking, plus milk, yogurt, soda and other snacks, they always bring him a ripe banana, he loves it.»

Dilan, who is just beginning to say his first words, does not suspect that, while he is playing in the crib, those men and women in green coats and face masks who visit him daily and caress him with their eyes, are the ones healing him not only with medicine, but with their hearts, as well.

Liliana will surely talk about them, about their dedication and love, because that is the best memory she takes home, she tells us at the end of the conversation.

«The two medical teams that have assisted us, both those of the first group, who received us when we arrived at the center, and the staff here now, have been wonderful with my child and with me. That is why I will return to Spain even more proud of Cuban doctors, and always grateful that they saved our lives, in time.» (Taken from en.granma.cu)