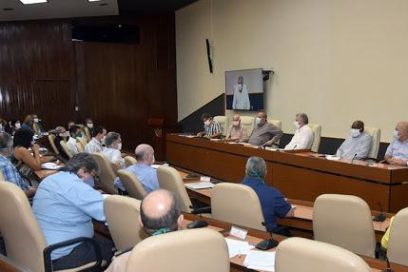 President Miguel Díaz-Canel Bermúdez called to continue work to contain the virus with great precision and rigor – and the support of the population – since the success of our efforts to confront the pandemic depend on these principles, during the March 31 meeting of the Cuban government, to review the COVID-19 situation in the country, make decisions to advance the effort, and evaluate those made previously, as has become the norm every afternoon.

As part of this meticulous work, Prime Minister Manuel Marrero Cruz commented that some 230 government measures have been adopted, and implementation is moving forward as projected.

He stated that, given the advance of the pandemic globally, and in line with Cuba’s prevention and control plan, the decision was made to request the withdrawal of all foreign vessels from our territorial waters.

He noted that, as the Revolution has taught us, if any situation arises regarding the health of crew members or passengers, technical problems, or fuel supplies, our government will, of course, respond as needed.

The current context also demands the suspension of arrivals to the country of all passenger aircraft, regularly scheduled or charter flights, he stated, since this poses an additional risk for our people.

In this case and as previously announced, exceptions will always be made, for our international brigades, the delivery of donations from another government, an emergency that requires facilitating airport services, or the arrival of needed supplies and merchandise, etc.

Cuban civil aeronautics authorities will convey the decision to airlines that continue to fly to the island, so protocols that are established in such cases are followed, the Prime Minister added. (Taken from en.granma.cu)