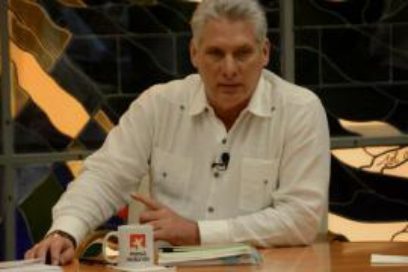 The President of the Republic, Miguel Díaz-Canel Bermúdez, appeared on the Mesa Redonda television-radio show, Friday March 20, along with Prime Minister Manuel Marrero and other ministers, to announce new measures adopted to confront Covid-19 in the country.

«As a state and government, we have the responsibility to protect human lives and the entire social fabric, addressing the situation in a comprehensive manner, with serenity, realism and objectivity. There can be no panic, but no overconfidence either,» Díaz-Canel stated.

In his initial comments, the President noted that those who are rightly concerned about the pandemic, and have suggested social isolation or total quarantine, should consider that while the majority of Cubans can isolate themselves, another portion of the population cannot halt activities that are vital to the country.

The President called to banish «selfishness in our reaction to the threats the moment brings. Among our strengths, solidarity has always been a fundamental value, and it is solidarity that we must promote at times like these.»

He said that the Cuban government feels highly committed, aware and responsible for preserving the life and health of our people, and that «this same commitment, this same responsibility, calls us to offer solidarity and cooperate with all those in the world who need it.”

The President said that, given global development of the pandemic, at this time, and the country’s own situation, the decision has been made to intensify detection and isolation work to prevent contagion and transmission.

The first measure announced by Díaz-Canel in this regard was the regulation the country’s ports of entry, with authorization only for residents of Cuba, although there will be flexibility to provide for cooperation with other countries.

«In this way, we ensure the entry of Cubans who are currently abroad, the return of foreign visitors to their home countries, and commercial activity,» he stated.

«This will allow us to avoid new cases, and focus on detecting more cases within the country, and avoid further transmission,» he explained.

This measure, which will be implemented as of Tuesday, March 24, and remain in effect for a period of 30 days, also stipulates that Cuban residents returning to the country will be quarantined for 14 days, to protect families on the island.

President Díaz-Canel also called for more serious application of social distancing practices, in everyday life. «This is responsible behavior to protect the most vulnerable sectors. Young people must avoid infecting their grandparents and parents, who may be the most affected.»

He recommended that highly susceptible persons stay at home, avoiding close contact with others, as much as possible, and reducing the number of contacts and the duration of visits, which have the greatest impact on the possibility of transmission.

He reiterated the importance of working at home, tele-commuting, providing online classes and activities for students, and going out only to purchase food or medicine, or take care of an urgent matter.

«Avoiding crowds, travel and public transportation at peak times, and cancelling social events, also demands a high level of consciousness and responsibility on the part of the population,» he emphasized, without overlooking basic measures like hand washing, keeping a distance of at least one meter from others, and seeking medical attention immediately in the event of any illness.

Also announced were a number of economic measures to protect the population’s income, including restructuring the workweek, extending unemployment benefits and temporarily waiving the payment of taxes, among others. (Taken from en.granma.cu)